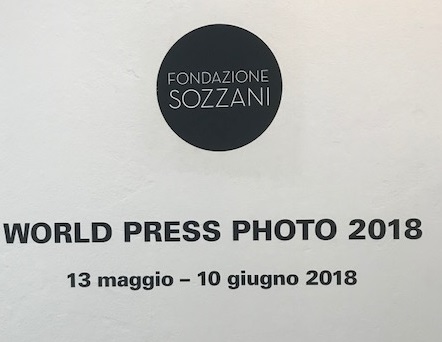 A sunny day and one exhibition more to see. Where? In Corso Como 10 in Milan, Obviously!

Also this year, Carla Sozzani Gallery presents one of the most significant photojournalism awards in the world.

The exhibition, in fact, as can be guessed from the name, rewards photographers who during the previous year have photographed an event of great journalistic importance and, in 2017, there have been so many!

The winners, selected by an international jury that changes every year (this year presided over by Magdalena Herrera) were selected among 4548 photographers and among more than 73.044 photographs. 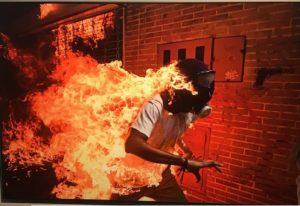 The picture shows a boy in flames escaping during a protest demonstration against President Nicolàs Maduro, in Caracas in May 2017. (For your info: the boy in the picture survived reporting first and second degree burns).

The exhibition, which is certainly not a walk of “pleasure”, in the sense that you do not find romantic photographs of landscapes at sunset or dancers on tiptoe or lovers who kiss in the moonlight, but groups a series of shots photographs of great intensity, both human and ambiental that often leave you breathless. 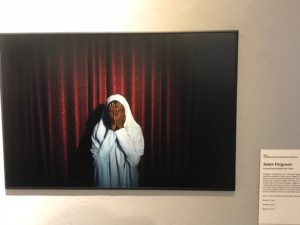 So you can see, walking through the photos, the beautiful and intense shot of Adam Ferguson, which depicts a girl kidnapped by the militants of Boko Haram, taken in Maiduguri, in the state of Borno, Nigeria.

The shot portrays the girl with her hands on her face against a background created by a burgundy curtain. You can read in the caption the story of these girls who are kidnapped by their torturers and used as kamikaze. In fact, they are tied to an explosive belt and ordered to blow themselves up in crowded areas. They, survivors who managed to escape and find help instead of blowing up the bombs.

Continuing the walk, you will be moved by seeing the shots Anna Boyiazis portraying a group of women from the Zanzibar Archipelago who learn to swim holding on to empty bins. In their villa, cites the caption, the girls are discouraged from learning to swim, due to the restrictions of a conservative Islamic culture and the absence of swimwear. What for us is normal and devoid of sensationalism, like taking a bath, in front of this photo all our daily life and problems  became ridicules.

And so on, the walk, among the photographic works, assumes an ever more reflective and dramatic climax in its visual poetry.

The advice, is to go and make you an alternative introspective walk.

Do not worry if you find a little ‘row at the entrance, it is very fast and smooth, take less than 6 minutes of waiting, and it’s worth it!