Have you ever heard of Arancino? 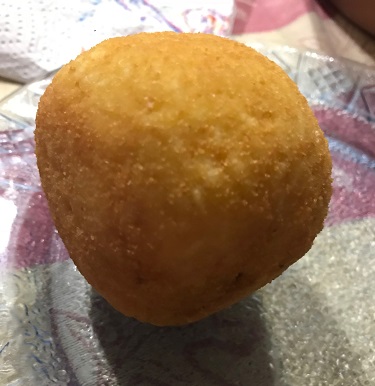 First of all we start by saying that the world is divided into two factions: some call it “arancino” and others “arancina”.

On this matter, even the Accademia della Crusca  intervened, which, for those who don’t know it, is an Italian institution that gathers scholars and linguistic and philological experts of the Italian language, according to which “it owes its name to the analogy with the round and golden fruit of the orange, that is the orange, then we could conclude that the correct gender is the feminine one: arancina, but it is not so simple … “. 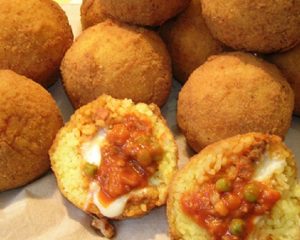 Personally, I always called it arancino, as my grandmother used to call it and so my grandmother’s grandmother too; but you know, Sicily is beautiful because in one region there are several languages ​​spoken and, of the same recipe, there are at least a dozen variations depending on the regional location.

All this because, as many people do not know, Sicily is a very large region of Italy, which in the course of its history has undergone several dominations that often led it in the past to be geographically divided (originally the Elimi, the Sicani and Siculi etc …)

Imagine then if, as for the dialects that exist different, there are also different recipes (one of all the famous parmigiana that divides all people in the kitchen, not only in Sicily but throughout Italy).

Talking about the Arancino is defined as a specialty of Sicilian cuisine that, like the song of sirens, attracts everyone, no one excluded, tourists and locals, to eat at least one a day.

You can eat the arancino indeed as an aperitif, in the afternoon as a snack and at dinner if you decide to taste more than a different type of stuffed arancino.

But what exactly is it? It is a fried rice ball, 8-10 cm in diameter, stuffed with meat sauce. The name therefore derives from the typical shape and color, reminiscent of an orange: from here the name of arancino. .

Originally in the eastern part of the island, the arancini could have a conical shape, but nowadays in almost all of Sicily, the different shapes serve to recognize the different fillings: for example the perfectly round one is with meat sauce (with peas and carrots) , the conical one with butter (with mozzarella and prosciutto) etc …

The arancino seems to have been imported by the Arabs who used to eat rice and saffron seasoned with herbs and meat, during meals. The invention of breading in the tradition is often traced back to the court of Frederick II, when a way was sought to bring the food during the trips or hunting trips. The crunchy breading, in fact, ensured an excellent preservation of rice and seasoning, as well as better portability. 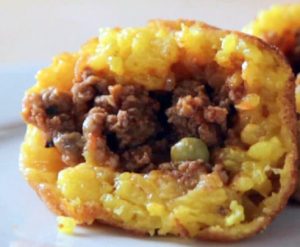 The most common arancini in Sicily are the ragù with peas and carrots or the one with butter (with mozzarella and ham) but each city has its own variant: for example, in the area of ​​the Sicilian hinterland, the arancini are stuffed with meat sauce peas and carrots, hard-boiled eggs and mozzarella (a real high-calorie goodness!), in other areas, for example in Palermo it is very common to use saffron to give a golden color to the rice, very compact and separate from the stuffing (here in photo). 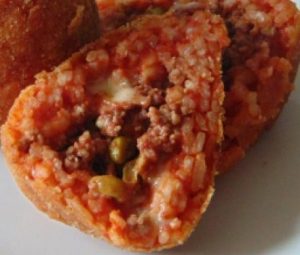 Contrary to what happens in the area of ​​Messina and Catania, where the sauce is used instead of saffron (here in photo).

Of course, every person living in their city think that the other recipes as blasphemous and heretical and will be ready to tell you that the only official recipe is that of their city! (But do not despair, they’re all good)

In the end, there are variants that over the years have been consolidated to satisfy an increasingly tourist and heterogeneous clientele, in fact, in addition to the traditional recipe were then added other ingredients in recipes that include, in addition to rice, the use of mushrooms, sausage, salmon , chicken, swordfish, seafood until you reach the sweet variations! 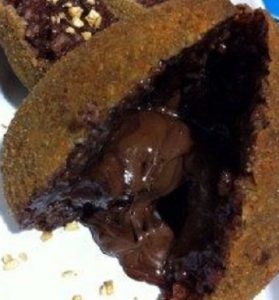 Yes, sometimes the arancini are prepared with cocoa and covered with sugar (they are usually prepared for the festa di Santa Lucia) or with the cream of gianduia (especially in the Palermo area) and chocolate (the latter can be found in Modica during annual chocolate festival)

So if you want to prepare the recipe for the arancino or arancino, the web is full of recipes, each with its tricks and its variants, so do not worry, choose carefully what you like best.

Me? I have personally cooked 43 arancini (a rather tiring but in some ways satisfying experience) following the recipe that my grandmother had given me directly, which is Sicilian. The procedure is not difficult, it is only long, in fact, it takes two days to prepare. If you want to try the complete recipe, I’ll posted soon the recipe, the one personally cooked!