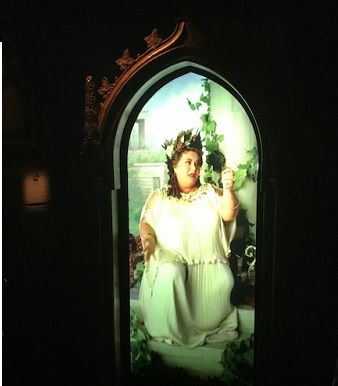 However, for those who went to the exhibition could learn a new spell: how to lose shortly about 20 euros. Because it’s actually what happens.

vote for the organizzation
10 su 10. Indeed with all the people gathered at the door, the entrance to the exhibition is more than punctual to each entry slot (about every half hour) and the staff is friendly and helpful.

Sceneries, reproductions of objects, costumes and interactive areas, in short for a Harry’s fun is like being in front of a huge buffet after days without food: this was the expectation.

In order not to be influenced by our judgment, we deliberately avoided reading the various comments and reviews, so as to be as objective as possible. 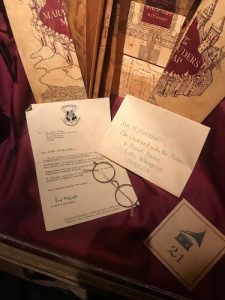 At the entrance of the exhibition you are encouraged to use the bathroom as inside the exhibition is free of hygienic services. It doesn’t matters if the 70% of the participants are children at the show.

In the first room there is a very good and motivated girl who welcomes the group of participants in strictly Hogwartsian clothes and who chooses among the audience 4 people (mostly children) to wear the famous talking hat that smista, as in history, the people in the four families (Grifondoro, Tassorosso, Corvonero and Slytherin).

Obviously the voice is recorded and the magic of the moment is all about the skill of the girl who knows how to interpret the part.

For the kids it’s really exciting, for the old fun a little less (and you wish it to appear from around the corner Lord Vordemort to incinerate everything).

You understand then that you have ended up in a sort of entertainment for children’s birthday parties, but it does not matter, in your heart you hope that the exhibition takes off “to infinity and beyond” consider that there are 1600 square meters to see!

But the saddest thing, if you are an empathic minimum, is to see the hopeful face of disappointed children in not being chosen by the girl. 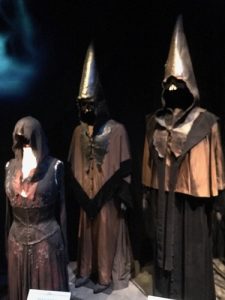 We asked ourselves several times why and the answer was: simply to cover the paucity of the stands that otherwise would have revealed the true nature of the show.
You cannot even use the flash in taking pictures, who knows why (…)

Then the path starts to become more interesting, in fact you can see Harry’s bed and a lot of mannequin busts with the stage clothes (hoping they are the originals). In short, in the shadows of the rooms, a walk takes place between mannequins and reproductions of coarse animals helped in the likelihood by the penumbra.

The exhibition is therefore static and the problem is that you have to wait for the crowd of people to run in front of the bulletin boards in order to read the captions or see the objects. In short, it seems to be in line for a concert and this type of display for an exhibition is not absolutely good because the risk of passing over and get bored and then run away is really easy. 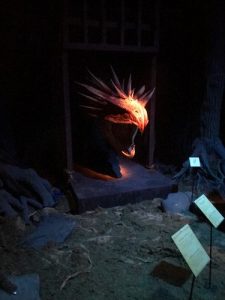 Certainly for the children, the impact is certainly different, great and exciting, hoping that they are not too smart to understand the artifice that is at the base.

The interactivity of the exhibition?

In conclusion, we absolutely did not expect to meet the parade of all the actors who greeted you, and therefore if you are not able to invoke a Divversiò as in the saga (enchanting spell that alters the behavior of a person, making it cheerful), you will end in less than an hour this path by accessing the room that sells merchandising.

Here, of course, the light is there and the prices are very clear, as to say always applies to the usual phrase that “for everything else there is mastercard”

I don’t know how I could give you the idea of the disappointment that may arise from this exhibition: it’s like entering a semi-dark room and being told that it’s the room where the wizard Merlino slept and worked or a famous person that you really like, so much that you cannot see anything and believe for only a mere act of trust. Like in God