God save the Queen and the guests at the Royal Wedding 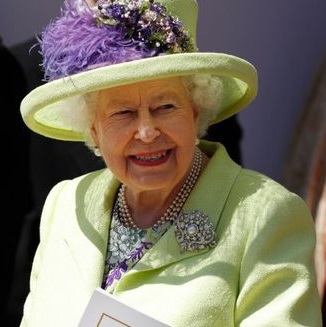 Yes, finally, even the Prince, the cute one that everyone wanted to have as a partner at the university, get married! And I would add: thank to God!

Not for envy, for jealousy of financial resources or for glamour, but because maybe, finally, social networks, Facebook, Instagram, Google news and even Linkedin will give us a bit of respite. Magazines and newspapers have overwhelmed us with information, sometimes even completely irrelevant.

Despite the period of economic crisis that afflicts people who complain every day of their daily lives, their job, their salaries and despite the Brexit that should have made the spirits darker and less joyful than usually, there has been an emotional participation of the globe so high that it reaches the highest forms of stalking.

All the enthusiasm that can be had for a wedding of which the spouses do not know, such that droves of people show their affection sleeping in sleeping bags on the roadside waiting for  the car with the bride inside, I honestly do not understand it. Perhaps it will be my particular form of anaffectivity, but far from judging the relationship of love towards one’s Reals or VIPs.

After the wedding of the heirs to the throne, April 29 – 2011, of Prince William and the Kate Midddleton today Duchess, it is the turn of the Royal Wedding number 2.

All the happy mass-media in the increase in sales or clicks, (good and right in a free market) have turned into the bad tabloid, feasting on the most useless information.

On Facebook they multiplied in record time, like a bacillus of influence in a weak body, the articles on how to eat Meghan Markle, even on the wall of Linkedin shares of photos of Meghan suddenly became the queen of the 2018 style, on Instagram then, it was assisted by the invasion of the “wannabe Meghan style” addicted.

On the gossip magazines, the speech is obviously different, who does not mind what Megan wears when she is sad or with which hand she eats dessert!

In short, it is nice to read the labels of the Royal House, because they are things that will not change our lives but add a touch of lightness to our non-royal life, but from here to become obsessed by two “poor” kids who get married, it seemed a little morbid.

Needless to say, on this form of absolute admiration for the royals, the English and their merchandising do not beat anyone! From pens to cups to swimsuits …

Immensely happy for them, as for any other couple who decide to take this step, let’s move on to the wedding outfits.

It would actually be too easy to make a rundown of photos with captions of names and surnames as did all the largest and venerable information and fashion sites (for par condicio with my conscience I still attach the link to the holy bible Vogue), then I will just give a brief list of my favorite outfits:

1- In the first place there is indisputably Her, the only and colorful, Her Majesty Elizabeth II, who has fascinated everyone with her lime green coat, brimmed hat but which clearly shows the face (as per protocol) with insert of purple feathers that resumed the print (floral?) of the dress below. Jewel brooch on the reverve of the coat and light makeup as usual with the smile of those who decided to challenge the concept of mortality.

A special note about the Queen: at the wedding of her nephew William in 2011 she was dressed with a lemon-yellow coat: sweet and sour as always! 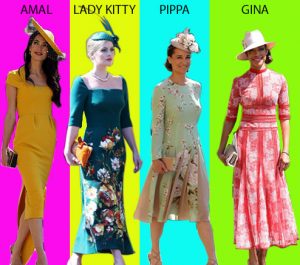 2- In second place, in terms of elegance, is placed Lady Kitty Spenser with a charm that vaguely reminiscent of Grace Kelly. Enchanting with a floral dress on a green Dolce&Gabbana base painted entirely by hand. This year he has taken part in the Milan Fashion Week and is the protagonist, not surprisingly, of the Dolce&Gabbana Spring/Summer ADV.

3- In third place, the Hollywood beauty of Amal Clooney. Ok, he’s not an actress, he’s not from Hollywood but from Lebanese origins and she’s a lawyer, but she’s sported a yellow longuette dress with a tail, a hat with a lateral veil and a star-made make-up from the 50s. Loose hair with natural waves, red lipstick and defined eyebrows, eyeliner and mascara, has in fact enchanted most of the reporters and guests (that’s why George laughed blissfully, then laughed less when, not recognized, he was blocked at the entrance for checks).

4- In fourth place is the famous sister of Duchess Kate, Pippa Middleton. Sober though floral, sophisticated and not excessive, radiant with a long pastel green dress with light flowers patterns and powder pink pleating inside. Cap combined with the dress, always with a floral theme.

5- In fifth place Gina Torres, Meghan’s colleague in Suits, beautiful and elegant. She wore a 3/4 dress with a lot of nochalance, with a red and pink nuance with white embroidery and matching the dress. A dazzling smile and a confident bearing like its extravagant elegance. 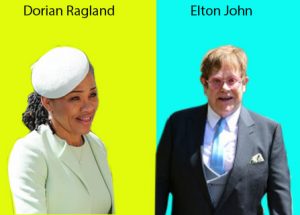 6 – In sixth place  Elton John, now a frequent visitor to every party and court event. He with his pink Gucci sunglasses  rosawins over all the extravagance of the hats, which this year have indeed been very subdued.

7 – In seventh place the earring on the nose of Doria Ragland, the mother of Meghan. Pastel green dress, tights, clutch bag and hat set like a drop on his head. Deserves a place in the standings, for the sobriety and elegance of a simple woman not used to certain parties. For this reason, her choice to keep the earring on her nose against any English protocol (and who knows if the protocol would have never predicted it) was TOP and irreverently chic.

1 – Kate Middleton, out of the standings, remains the undisputed future queen for obvious reasons of succession to the throne and undisputed it will be for the choice of her dress that, it should be remembered was recycled for the third time: it was the same of the baptism of Princess Charlotte and was also worn during a state trip to Belgium in 2017. Unless she bought the Alexander McQueen’s dress in series, her gesture may have dubious interpretations: “I do not care about the wedding of this one here “, or “I avoid shining for my royal beauty while maintaining a low profile” and adhering, it seems, she too to the movement launched by Livia Firth on the recycling of clothes.

2 – Victoria Beckham, someone sooner or later will suggest her to smile occasionally to the events by removing the funeral air from her face, because, apart from the husband, she has so many things to be happy with, less for her company. She in her blue dress of her unconventional cut with a pop touch in the use of red suede shoes. On her husband, David Beckham, nothing to say: he wins easily with the gaze of someone who knows how much the feminine universe, and not only, loves him. 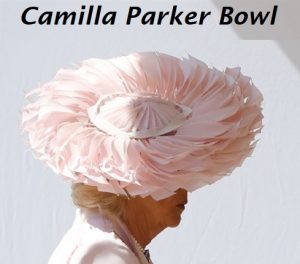 3 – Finally, I will never forget until the end of my days, the hat of Camilla Parker Bowl, considered by many extravagant, from me simply a tray with huge slices of cooked ham.

And this marriage is gone too. Next.